Saved Searches Advanced Search
During our system maintenance from Jan 17-31, “My Account” will be inaccessible. Learn more.
Most digital content will remain available via our Download & Stream page. 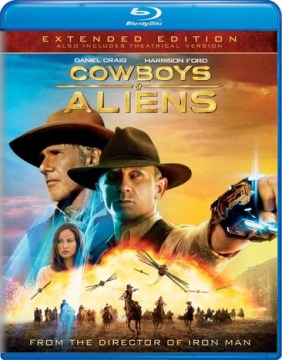 I was prepared to be disappointed but wasn't. The melding of 2 genres was done fairly well. The way Daniel Craig played his part reminded me of Yul Brynner back in the day.

Daniel Craig is sure easy on the eyes. He obviously doesn’t have to say much, but standing in his chaps with his shirt open compensates for that. Well-known cast, but are they actors? Not a good story. Harrison Ford but not a good story. Harrison Ford being gruff is laughable. One reviewer says “It has cowboys. It has aliens. It does exactly what it says on the tin. Unfortunately, it rarely does anything more than that.” So true.

Watched this on Netflix before they removed it. Must have watched this several times. There are hidden gems of folklore and urban legend that is put together in an fun space western. If you look deeper into the movie, and do some video surfing online, you are probably going to find deeper meanings within the movie itself.
For example:
1) Amnesia - lapses of memory - sounds like abduction phenomenon.
2) Cattle destroyed at beginning of movie -- Cattle mutilation.
3) Gold extracted to power space-craft -- viewed some video something like that happening, probably an episode from Ancient Aliens
4) The strange lady chasing Craig character -- alien hybrid
5) Experiments done on people, going in holes underground -- Area 52 or urban legend of where missing people/abductees go.
6) Western and UFO -- The Aurora UFO crash.
7) People mesmorised staring into some white ball of light. -- have to check on that, but think there could be something there too.

This is what is fascinating to me about the movie. It's like a fun western movie that's loaded with all sorts of information that if you did some digging, that some aspects of the story line seem like it's based on actual things that may have been documented to happen.

I like westerns, Daniel Craig & Harrison Ford. I expected to love this movie. I didn't. Seemed pretty hokey to me. I didn't understand where Craig's character got the weapon.

Somewhat imaginative, bizarre, moderately amusing way to pass an hour and some change you had to be during something during. A person has a certain amount of time between birth and dying and something has to be done during it. Watching this movie is one of the things a person might choose to do as an alternative to doing something else.

Enjoyable mixed blend of two genres, that of science fiction and western. Has it's fair share of action moments and one must admit, this is a different type of movie altogether. Very good when you consider that A. Some people proclaimed westerns as a dead genre, and B.having something unique can only be a positive in terms of filmmaking. I liked Harrison Ford in this one as he comes off as the crusty outlaw and Daniel Craig as the central hero is equally effective in the role of the hero. The usual CGI effects are to be expected, but it doesnt deter from this being a watchable movie.

Right up there with Raiders of the Lost Ark; classic western elements and funny!

An extremely LAME mash-up of the good western and good alien movies of the past period.Harrison Ford acted like he was severely constipated,and Daniel Craig acted like his anus was burning and itching like HELL throughout this shockingly cheap looking thrill at best period.I don't blame Steven Spielberg for not wasting tons of $ on this extremely cheesy celluloid,because he knows that this film is not worth it as well as the fact that movies don't make as much $ as they used to (and rightfully so) period!!!!!!!!!!!!!!!!!!!!!!!!!!!!!!!!!!!!!!!!!!

Give this points for truth in advertising. Too bad it's not very good. Or that it's not the aliens from "Aliens" versus the cowboys from "Lonesome Dove."

The idea is definitely ambitious and I was really hoping that it would work.

Once again, after reading the reviews some time ago about this film and being turned off by the over welming bad press this film recieved and my lack of desire at that time, I decided not to see it in the theaters. Even though i often follow my own feelings. However, while standing in line at Target with a friend, i saw this movie with a sticker price that was quite tempting. I love science fiction and horror and decided to buy it. Standing next to my friend holding this movie in my hand she said " I read the reviews about that movie and it sucked." So i told her to come to my apartment and watch it with me on my HOMETHEATER!! Regardless of what the reviewers said about this movie, the sound was off the hook!!! During one particular scene where the bad guys lead by Harrison Ford character ride into town, the sound of the horses charging had my floors and walls vibrating from my subwoofers. I smiled knowing this was a very good buy. I also liked the sound of the flying space vessels which sounded very cool in my surrounds as well as the weapons they used. This film is "sound freak approved." My lady friend was also very impressed with the audio. I like the story and the characters, but it was the sound that had my full attention. I guess the reviewers were not into sound. Looking at my melted pint of chocolate chocolate chip ice cream on my table by Hagen Daze, i had no idea that over two hours had passed by. I'm giving this movie 4 stars. For very good audio, a decent story, Harrison Ford as a bad guy, and turning my ice cream into a chocolate shake. Yummy!!!! A large pizza. Half with pepperoni and the other half with extra cheese.

Honestly, The cast and crew can't stop talking about how this idea has never been done before - but I wonder if they watched the movie they made? Because while the idea may be great - Ford phones it in, Craig looks great without his shirt and wears the tightest pants in the west, and the rest... dull, dull, dull. When Wilde's character is finally revealed... yawn. This one doesn't even have the camp value of Wild, Wild West.

came out on our samsung flat as too dark - difficult to see movemnt...

For special effects it deserves 5 Stars but for story and plot it squeaks 2 Stars. I found the bonus "making of the film" more interesting than the film itself.

Good movie with an interesting twist on your typical western. Well acted and a good plot line.

Actually quite good. Has humor and can overlook some plot inconsistencies but enjoyable none the less,

This movie was entertaining and interesting but not one of my favorite for this year. “Not too bad---good performance”. "I fast forwarded a lot but not all the way.”

A run of the mill western except that the bad guys in this movie are aliens. A vengeful alien helps the good guys and their posse destroy bad guy aliens in search of treasure. Cowboys and Aliens is far fetched to say the least.