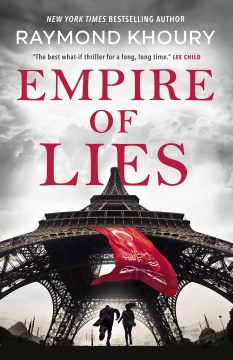 Baker & Taylor
In a groundbreaking thriller set in an alternate future where Europe has been conquered by the Ottoman Empire, a feted officer in the sultan’s secret police begins questioning his violent orders. By the best-selling author of The Last Templar.

Empire of Lies is a sweeping thriller in the tradition of The Man in the High Castle, Fatherland, and Underground Airlines from New York Times bestselling author Raymond Khoury.

“The best what-if thriller for a long, long time—makes you think, makes you sweat, and makes you choose, between what is and what might have been.”—Lee Child

Istanbul, 1683: Mehmed IV, sultan of the Ottoman Empire, is preparing to lay siege to Vienna, capital of the Holy Roman Empire, when a mysterious visitor arrives in his bedroom—naked, covered in strange tattoos—to deliver a dangerous, world-changing message.

Paris, 2017: Ottoman flags have been flying over the great city for three hundred years, ever since its fall—along with all of Europe—to the empire’s all-conquering army. Notre Dame has been renamed the Fatih Mosque. Public spaces are segregated by gender. And Kamal Arslan Agha, a feted officer in the sultan’s secret police, is starting to question his orders.

Rumors of an impending war with the Christian Republic of America, attacks by violent extremists, and economic collapse have heightened surveillance and arrests across the empire. Tasked with surveying potential threats, Kamal has a heavy caseload—and conscience.

When a mysterious stranger—naked, covered in strange tattoos—appears on the banks of the Seine, Kamal is called in to investigate. But what he discovers is a secret buried in the empire’s past, a secret the Sultan will do anything to silence.

With the mysterious Z Protectorate one step behind, Kamal, together with Nisreen—a fierce human rights lawyer—is caught up in a race across the empire and time itself—a race that could change their world, or destroy it.

Empire of Lies is being published as "The Ottoman Secret" in the UK.

Is the title, Empire of Lies, a veiled reference to the current American presidency? Is the author suggesting that if it were possible to use time travel to change the course of history it might be put to good use by changing the outcome of the 2016 election?

All hail the new alternative history author of the year!
Sure the time traveling method more in common with Pratt & De Camp classic fantasy book, the altered world more plausible version of 1984 or that Christian Republic of America used OPEC oil weapon in reverse or the ending mirrored Bring the Jubilee.
However, PTSD protagonist get reassured by fellow Turkish refugee.
Lee Child was right novel was best what-if thriller for a long time.

Empire of Lies by Raymond Khoury is not one of my usual favorite fiction genres but it captivated from the first sentence. This is a thriller dealing with alternate history and time-travel. In 1683, the Ottoman Empire is fighting for the capture of Vienna and, in time, the rest of Europe. The novel also begins in Paris 2017 where the Empire has been ruling for three-hundred years. Kamal works for the special police force and his function is to uncover dissidents and traitors. His sister-in-law, Nisreen, a civil rights lawyer, works for the families of people taken prisoner for unproven crimes. Together, the two will attempt to make a difference in their society. This is a must-read book if you like fast-paced thrillers.. It spans four hundred years of history. It will astound you and invite you to ask “what if”.