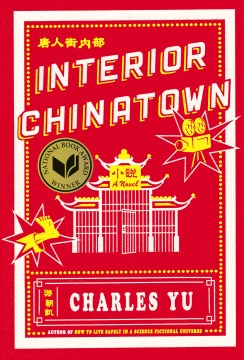 "From the infinitely inventive author of How to Live Safely in a Science Fictional Universe comes a deeply personal novel about race, pop culture, assimilation, and escaping the roles we are forced to play."-- Provided by publisher.
Publisher: New York : Pantheon Books, [2020]
Edition: First edition.
ISBN: 9780307907196
0307907198

"From the infinitely inventive author of How to Live Safely in a Science Fictional Universe comes a deeply personal novel about race, pop culture, assimilation, and escaping the roles we are forced to play."-- Provided by publisher.

Features the process of adopting new culture and language. This book is a National Book Award winner.

Thoroughly enjoyed Interior Chinatown. It's a quick read, once you get used to the screenplay format. The typeface is Courier, a large font, set with plenty of white space and blank pages, as there might be in a TV script, which is how this inventive tale is presented, including Acts, Characters, Production Notes, and Casting. I gave this a solid 4 for the unusual screenplay/novel format and for all I learned about the stereotypes that Asians have lived with, including the many Acts of the U.S. Government designed to hold immigrants of Asian descent "in their place." The scenes are funny, sardonic, sad, uplifting, and sincere. The characters and plot... Very Good!

Other's have made it clear that this pseudo movie script is a worthwhile read, being the winner of the 2020 National Book Award as well. Personally, heard all about the Chinese Exclusion Act but not the rest of US laws between 1859 -1943 created to oppress ethnic Chinese in America. This novel makes me appreciate the breakthrough of Asian actors in the TV series Warrior (e.g. an Asian character, played by Andrew Koji of mixed Japanese and English heritage, gets the girl in the story):

Oh so inventive; a story built on screenplay tropes and stereotypes takes a poignant look at life in the U.S. for those who don't find a place in the delineated categories of black or white. Whitty and humorous, creative, dark and unsettling, Yu draws on something we all know, namely TV tropes, and uses them to unveil to the reader a glimpse of the U.S. Asian experience. It's not the easiest read at times, due to it's unique narrative approach, but its well worth sticking with until you get the flow. Despite it's novel entertainment based and humorous approach, this is not a light tale, as it takes hard looks at the racism and discrimination Asian Americans have faced while striving to be a part of the American dream. Yu's own voice look at the Asian American experience made me laugh, but left me with my heart rent, and my perspective expanded.

This intelligent, cleverly presented book will help you understand what racism and barriers people of Asian heritage face in the USA. So, it is educational, but even more so, it is the story of a young man stuck in a rut, an impossible dream, who eventually figures out his personal priorities and along the way we are treated to some of the most tender, heartfelt writing I have experienced about the beauty of family and devotion to same.

Super-inventive novel about the "roles" that Chinese-Americans play in American film and TV, and in American public life. The semi-screenplay format blurs these two together, and the novel makes its points about Chinese-American identity through form as much as through content. Offers some trenchant insights about the shallowness and racism of American culture as well. Though there's lots of dark humor and satire here, Willis Wu's struggle to figure out who he really is and what he really wants is compelling.

I'm a first generation Chinese and looked forward to reading this book. It was not easily readable to me. One needs to be in a certain frame of mind in order to
assimilate this style of writing. After a couple of days trying, I gave up.

If you want a novel that will be an artistic as well as educational experience, pick up Charles Yu's stylish Interior Chinatown. The presentation of the novel as a movie or television script works quite well and leads to the main character's reflection on who he is and who it has been shaped by film and television. Using the cinematic technique of changing scenes and introducing different locations, we see the family stories of each character evolve. Through them, Yu tells the challenges and unknown backstories of people who came from Asian countries seeking the American Dream, and how the media version of that concept became its own challenge. Yu is a such a skillful writer that he leads the reader down unknown corridors and suddenly, gently, you see the hall of mirrors he's trying to explain. Some incredibly funny lines, some powerfully tender descriptions, and wait, no, it's not over, there are more pages, right? The final act is very satisfying though, and fortunately there are three other Charles Yu novels to read as soon as I can get my hands on them.

The novel takes the form of a teleplay; the text is typescript. It's a very quick read. The main character and narrator is Willis Wu, Generic Asian Man. He and his cohorts in the Chinatown SRO above the Golden Palace restaurant have small parts in a police procedural "Black and White" filming in Chinatown. They slip anonymously in and out of character and play many small roles interchangeably until Willis refuses to continue playing the part assigned him in favor of being just a real dad to his daughter in a far-off suburb.

Some scenes in the SRO, interactions between father and son, mother and son were affecting. Others were slick and shallow, the script of the police show is silly, a satire according to the critics.

My husband found the book LOL funny while I wondered why this novel won a National Book Award. Political correctness?

Written in screenplay format, this novel won't be for everyone...but the unique structure and the thematic content made this one right up my alley. It's kind of like "American Born Chinese" but written with an adult audience in mind.

No less than 4 of the blurbs on the book's backside employed the word "hilarious" in describing Interior Chinatown. I pondered that after finishing the final page. I had completed the book in three sittings without once laughing aloud, something I think would be required of anything described as "hilarious". So I will not call the book "hilarious" in even the smallest degree. I did think it was "clever" if perhaps by a touch too much. Its "cleverness" kept at bay any actual feeling towards its characters so I closed the book remarking on its cleverness. Another book on racism cleverly packaged as something a little more engaging.

Relatively large number of quotes, 48 as of today, in goodreads for a thin novel in a movie script form, thanks to its contributors:

-1859 Oregon’s constitution is revised: no “Chinaman” can own property in the state.
-1879 California’s constitution is revised: ownership of land is limited to aliens of “the white race or of African descent.”
-1882 On May 6, the U.S. (Federal) Chinese Exclusion Act is signed into law by President Chester A. Arthur, prohibiting all immigration of Chinese laborers, the first law preventing all members of a specific ethnic or national group from immigrating into the United States.

-1886 Washington Territory’s constitution bars aliens ineligible for citizenship from owning property.
-1890 In the City of San Francisco, the Bingham Ordinance prohibits Chinese people (whether or not U.S. citizens) from either working or living in San Francisco, except in “a portion set apart for the location of all the Chinese,” thereby creating a literal, legally defined ghetto. -1892 The U.S. (Federal) Geary Act requires all Chinese residents of the United States to carry a permit, failure to carry such permit (at any time) being punishable by deportation or one year of hard labor. In addition, Chinese are not allowed to bear witness in court.
-1920 The U.S. (Federal) Cable Act decrees that any American woman who marries “an alien ineligible for citizenship shall cease to be a citizen of the United States.”

-1924 U.S. (Federal) Immigration Act of 1924, also known as the Johnson-Reed Act, limits the number of immigrants allowed entry into the United States through a national origins quota. It completely prohibits immigration from Asia.
-1943 The Chinese Exclusion Act is repealed by the Magnuson Act and Chinese in the United States are given the right to become naturalized citizens, although ethnic Chinese in America were still prohibited from owning property or businesses. The quota for Chinese immigration is set at 105 people per year.
-1965 The Immigration and Nationality Act (Hart-Celler Act) is passed by the 89th United States Congress and signed into law by President Lyndon B. Johnson. The law abolishes the quota-based National Origins Formula that had been the basis of U.S. immigration policy since 1921.

Reflective on the generic Arab/Muslims after 9-11 and recently on generic Chinese since the Covid-19 Pandemic:

It’s Allen.
What?
He’s in the hospital. Someone beat him unconscious. Called him a jap. According to a witness, as the first man hit Allen in the temple, knocking him to the ground, they said, “This is for Pearl Harbor.”

Young Wu thinks: it could have been him.

Nakamoto says: it should have been him. All of the housemates realize: it was them. All of them. That was the point. They are all the same. All the same to the people who struck Allen in the head until his eyes swelled shut. All the same as they filled a large sack with batteries and stones, and hit Allen in the stomach with it until blood came up from his throat. Allen was Wu and Park and Kim and Nakamoto, and they were all Allen. Japan, China, Taiwan, Korea, Vietnam. Whatever. Anywhere over there. Slope. Jap. Nip. Chink. Towelhead. Whatever.