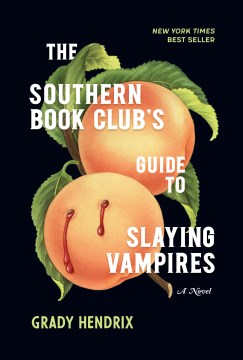 "Patricia Campbell had always planned for a big life, but after giving up her career as a nurse to marry an ambitious doctor and become a mother, Patricia's life has never felt smaller. The days are long, her kids are ungrateful, her husband is distant, and her to-do list is never really done. The one thing she has to look forward to is her book club, a group of Charleston mothers united only by their love for true-crime and suspenseful fiction. In these meetings, they're more likely to discuss the FBI's recent siege of Waco as much as the ups and downs of marriage and motherhood.But when an artistic and sensitive stranger moves into the neighborhood, the book club's meetings turn into speculation about the newcomer. Patricia is initially attracted to him, but when some local children go missing, she starts to suspect the newcomer is involved. She begins her own investigation, assuming that he's a Jeffrey Dahmer or Ted Bundy. What she uncovers is far more terrifying, and soon she - and her book club - are the only people standing between the monster they've invited into their homes and their unsuspecting community."--Provided by publisher.
Publisher: Philadelphia, PA : Quirk Books, [2020]
ISBN: 9781683691433
1683691431
9781683691457
1683691458

Grady Hendrix is one of the strongest modern voices in horror, and his newest release is a prime example of his talent. He somehow finds a way to create a story about the bonds of friendship while simultaneously making a terrifying tale of vampire horror. And fair warning….Hendrix is a master of ... Read More »

This has been called "Steel Magnolias meets Dracula" and that's a surprisingly apt description. While the exposition made me worry that there would be white saviorism in the conclusion, that was not the case. In fact, the (white male) author uses the races and genders of his characters to make some interesting points.

I thoroughly enjoyed this book. Love good horror/vampire books, and this is one! The Stepford wives find their strength. And then they kick butt. A tale of friendship too.

This book was my first taste at the horror genre, and I have to say I was pleasantly surprised. The Southern Book Club’s Guide to Slaying Vampires was a great introduction to the genre for me without copious amounts over blood and gore (though blood and gore were not completely absent). The Novel takes place in the 1980’s and 1990’s, and follows Patricia and the other housewives that make up her true crime book club (which honestly I think Liz and I need to get started at Leawood). When a sensitive and mysterious neighbor moves in, Patricia’s true crime senses start ringing like crazy. Kids in the community continue to go missing, and Patricia has an idea who they should all be pointing their fingers at. I love how the Goodreads summary describes this “Fried Green Tomatoes and Steel Magnolias meet Dracula in this southern-flavored supernatural thriller.” Overall, I love the southern flare and 80’s/90’s retro feel. I would say I felt like a lot is revealed in the summary/ to the reader that I wish their was a bit more mystery to it, but if you just finished reading Twilight in anticipation of Midnight Sun, and can’t read anything, but vampires, give this book a try with less love and more gore. 4 stars.

With all the craziness in the world right now this book takes your mind off it all. I can’t recommend this highly enough!!! I read it on my kindle, then borrowed the physical book and bought a copy for a friend. And... I’m reading it again, it’s just that good! Loved it super much!

When I think of Grady Hedrix, I think HORROR. That is probably because the first book I read by him was “Horrorstör”. That is not what I got from “The Southern Book Club’s Guide to Slaying Vampires”. The title and description held such tantalizing promise. It was even a bit cheeky. Perhaps, I’m just in a place. I wanted, needed more action. The story follows five women of a book club from 1988-1997. Most of those years spent in ignorance or fear, depending on the character, of the suave stranger who is backing their husbands rise to fortune and fame while feeding on the children in a neighboring low-income black community. The book is as much an essay on the roles of women in those years as it is on the way a very old creature has seen it all before and can easily stay at least one step ahead. This is a slow burn with brief eruptions. Many people enjoy it, but at this moment, it was just too slow for me.

is there a subgenre for 'suburban horror?' if not, there should be, and this would be a shining example. 'The Southern Book Club's Guide to Slaying Vampires' is a visually enjoyable book, from the gorgeous cover to the section headings that match the books being read by this group of genteel housewives.
i'm sure this isn't as scary as standard horror books, but there were a few occasions when i had to read something else before turning off the lights.

Grady Hendrix is one of the strongest modern voices in horror, and his newest release is a prime example of his talent. He somehow finds a way to create a story about the bonds of friendship while simultaneously making a terrifying tale of vampire horror. And fair warning….Hendrix is a master of sneaking up on you at the most unassuming times, turning a quiet moment into a grotesque scene that takes you completely by surprise. “Southern Book Club” is definitely no exception to this, and is his best work to date. A must-read for all horror fans!

So good! A group of women in a small town build a friendship that begins with a book club, and their reads of choice are true crime. They think they would know how to spot a bad guy, but when evil moves into town right under their noses, it goes unseen until it's almost too late. The story completely sucked me in, got my heart rate up, and delivered with a great ending! I also love that it was set in the 90s. Five stars, especially on audio, narrated by Bahni Turpin.

The title pulls you right into this hilarious and gory story about friendship, 90's southern hospitality and taking down the neighborhood vampire.

I read this in one sitting & stayed up waaaayyyy too late!

The book starts with some humor & I could just picture these women, these scenes. Knowing the people & places there, he nails it. He really does. But, it's not too long before it gets a little, then suddenly a lot, creepy AND gross. The gross factor is the part I like least about (every one of) his books. I know he's writing homage to vintage 80s/90s horror, so it fits. But it's still disgusting in parts; it gave me the shivers more than once. He combines psychological horror with gross horror, so there's plenty of dread AND disgust. (Have an issue with bugs? Rats? Blood? More? Caveat emptor.) He also addresses a lot of issues in this book from inherent racism & the horrific past (& present) in the South in regards to that, as well as domestic violence, gaslighting, sexual assault, & more. Children are definitely in danger in this book & some don't survive. While there's the horror of a vampire, these other topics present far more horror, winding in & out of the pages & through the lives of the characters. Not a book for the squeamish whether it's confronting the gore-fest (in places) or the more insidious terrors of racism, domestic violence, etc....

He works in a lot of the traditional vampire mythos, but he also has a unique (at least amongst my readings) take on a few facets. I'm neutral on those but at least this is an old-school, terrifying vampire, not the glitter-fest, angsty teen version that was so popular a decade or so ago. He restores the vampire to its rightful (imo) horrible history.

As always, I appreciate the cool little publishing details that he & his publishing company include. The front cover has a varnish on the blood drops; I hadn't really noticed it until the sun flashed on the book cover & then I realized it makes the blood drops look fresh. Real. The inside title page has some nice illustrating with magnolia blossoms, but with coffins instead of leaves. The end of the book looks like a printed Christmas letter that you buy paper with a design on the edge & then mass copy to send out to your recipients (that oh-so-popular staple in Christmas cards in the 1990s). Because the book centers on a book club, he has divider sections that have different book titles (reflecting what the book club is reading at that point); each book title also ties into the storyline. All those nice little details & touches make the publishing nerd in me very happy. I have found that level of detail in all his fiction books I have read (Horrorstör; My Best Friend's Exorcism; and We Sold Our Souls). To me, these special touches really require a hard copy, not an ebook version, to fully appreciate.

Probably a 3.5 star book for me, but I'll round up to a 4 because I enjoyed the setting & the humor & the larger issues presented. (The gore takes away a star for me even though I know that's a part of reading his works. It can get really gruesome in parts.)

Summary: A funny (in the beginning), disturbing, gross homage to 80s/90s horror pulp fiction, pulling back the civilized veneer of upper-crust suburbia. Oh, and there's a vampire.