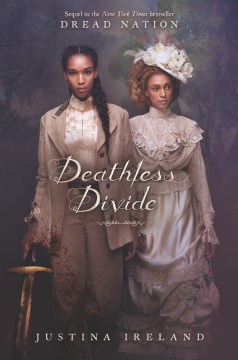 Baker & Taylor
A sequel to the best-selling Dread Nation finds a devastating loss throwing everything Jane believes into question, before encounters with familiar faces in Summerland enmeshes her in a maelstrom of deception and private demons. 75,000 first printing. Simultaneous eBook.

The sequel to the New York Times bestselling epic Dread Nation is an unforgettable journey of revenge and salvation across a divided America.

After the fall of Summerland, Jane McKeene hoped her life would get simpler: Get out of town, stay alive, and head west to California to find her mother.

But nothing is easy when you&;re a girl trained in putting down the restless dead, and a devastating loss on the road to a protected village called Nicodemus has Jane questioning everything she thought she knew about surviving in 1880s America.

What&;s more, this safe haven is not what it appears&;as Jane discovers when she sees familiar faces from Summerland amid this new society. Caught between mysteries and lies, the undead, and her own inner demons, Jane soon finds herself on a dark path of blood and violence that threatens to consume her.

But she won&;t be in it alone.

Katherine Deveraux never expected to be allied with Jane McKeene. But after the hell she has endured, she knows friends are hard to come by&;and that Jane needs her too, whether Jane wants to admit it or not.

Watching Jane&;s back, however, is more than she bargained for, and when they both reach a breaking point, it&;s up to Katherine to keep hope alive&;even as she begins to fear that there is no happily-ever-after for girls like her.

An action-packed and gritty sequel to Dread Nation. Told in with dual POVs, we get to see what happens to both Jane and Katherine after the fall of Summerland.

After the fall of Kansas survivalist town Summerland, Jane McKeene, Katherine Deveraux, and their group set off to what they hope is a better opportunity at life. But of course, life is never easy, especially while surviving in 1880's America with the restless dead. On the road to a protected village called Nicodermus, the group suffers a loss. Then, what appears at first to be a safe haven, Nicodermus becomes filled with lies and mystery.

The group becomes separated and Jane soon finds herself on a path filled with darkness and blood while Katherine does everything she can to continue on. Katherine never expected to be friends with Jane McKeene, but after everything she's been through, she knows friends are hard to come by; her best friend, Jane, needs her now more than ever. When the duo reach a critical point, Katherine is the one who must keep hope alive so they can survive.

I enjoyed this book so much. My heart broke for Jane and all the hardship she had to go through, but I loved the badass fighter she became. The story arc she has through this novel kept me intrigued to see it to the end. Katherine however, really stole the show for me. Just having her be there as an ace character doing her thing and surviving - all while wearing a corset - is amazing. Also her love for stubborn and sometimes unflinching Jane is heartwarming; she's loyal to Jane no matter what, even when Jane tries to push her away. I respected Jane but I admired Katherine. Both girls are such badass characters for me and I love them both so much.

I'll try not to mention anything major about the story line, but it's pretty good to say the book splits between "Nicodermus" and "After Nicodermus." "After Nicodermus" leads in directions I would have never guessed and it had me turning page after page. It's intense. New, interesting characters are also introduced, many of whom were just as interesting as Jane and Katherine (I would have loved to see more of Carolina and Katherine's friendship).

Even with the back and forth between each chapter of Jane and Katherine's POVs in Deathless Divide, it has, just like Dread Nation, such an incredible, strong narrative. The way that Justina Ireland writes blows me away. Both characters give the reader so much to connect and hold onto.

I absolutely loved the ending of this book as well. I was so concerned in the last 75 pages or so that it wouldn't end well - not because I didn't want another one (at this point, I will read anything Justina Ireland writes I just love her writing so much), but because I was worried I was going to have to wait another two years before I found out after being left with a cliff hanger. Ireland was able to write the end perfectly that I was happy with the wrap-up of Jane's story.

Deathless Divide is a book I will now always recommend (of course after one reads Dread Nation). It has strong, independent, black, female, queer characters. It addresses issues of racism, sexism, mental health, and the meaning of surviving. The story is an easy and fast-paced read with characters that, as a reader, one can fall in love with.

Dread Nation was a complete thrill for me, and one of my favorite books that I read in 2019. When I learned that the amazing Justina Ireland was writing a sequel, I just about lost my mind over the excitement. Seeing more of the life and adventures of Jane McKeene and Katherine Deveraux in a world where the Zombie Apocalypse stopped the Civil War in its tracks and forced everyone to adapt, for better or worse (mostly worse, but some better), became one of my most anticipated thrills for 2020.

And wow, Deathless Divide did not disappoint one bit.

In simplest terms, DD is a Western colored by the above mentioned Zombie Apocalypse, but it's also so much more. Yes there are the familiar themes one sees in a Western tale - friendship, revenge, good vs. evil, etc. - but Ireland takes those themes to the next level, and creates a page-turner that will suck the reader in from start to finish. Plus, there's more badass women in this book than you'd find in a dozen old fashioned Westerns. That alone would have been enough to get my attention, though that was already handled by DN.

Overall, utterly brilliant. Ireland wraps up the story in a very satisfying manner. The greedy reader in me hopes for more stories about these outstanding characters, but if Ireland decides to leave their future to our imaginations, I would be equally satisfied.

OPL_KrisC thinks this title is suitable for 13 years and over