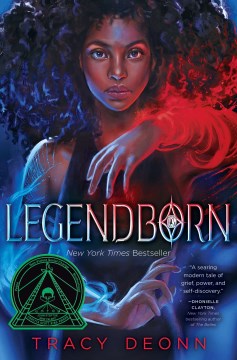 After her mother dies in an accident, Bree Matthews wants nothing to do with her family memories or childhood home. A residential program for bright high schoolers at UNC-Chapel Hill seems like the perfect escape-- until Bree witnesses a magical attack her very first night on campus. A young mage who calls himself a 'Merlin' attempts-- and fails-- to wipe Bree's memory of everything she saw. His failure unlocks Bree's own unique magic and a buried memory with a hidden connection: the night her mother died, another Merlin was at the hospital. Now she'll do whatever it takes to find out the truth, even if that means infiltrating the Legendborn as one of their initiates. -- adapted from jacket
Publisher: New York : Margaret K. McElderry Books, [2020]
Edition: First edition.
ISBN: 9781534441606
1534441603
9781398501874
1398501875

Very strong character development and plot. Took off half a star bc: 1. Like folks said there are A TON of characters to keep track of, 2. The plot moves really fast the whole time. The whole book spans maybe 4-5 weeks. At first it's hard to keep up. 3. Wasn't impressed with the love interest.

But this book has a fun "found family" dynamic. Several plot "twists" were unexpected but earned. Excited and nervous for the next installment!

I remain conflicted about this one two days after finishing it and I feel like it could be a 4 star book, but something about it just didn't...click with me. Things that worked: commentary on racism, slavery, and the effect of systemic racism on the past and present; the exploration of grief; and a solid twist.

I remain conflicted about this one two days after finishing it and I feel like it could be a 4 star book, but something about it just didn't...click with me.

Bree's mother recently died, and she has been left to pick up the pieces. She has been accepted at UNC Chapel Hill's early college program, and she and her best friend Alice are planning on going and immersing themselves in the college experience - even though Bree and her mom fought about her leaving right before she died. What Bree doesn't expect is coming across magic in her time at EC; magic, demons, and beautiful boys with legacies that stretch back in time promise to make her time there even more eventful than she had expected.

I'll start with the things I did like here. The way that there are kind of two magical "streams" at play in the book is really cool, and the ways that colonialism, slavery, and racism factor in is truly impactful. Rootcraft and the ways that Bree's ancestors influence her and shape her path were the highlights for me. I wanted more about this, sooner in the book, because it really engaged me and left me more interested in the world as a whole. I also quite liked Bree as a character; she's headstrong, but wounded, and full of grief, and her exploration of herself throughout the book is raw and real. I also enjoyed Sel, wayyyyy more than I did Nick. I never like the golden boys, and this was no exception.

Also, the twist at the end actually did take me by surprise. I'll give this book that.

Now, the first thing I have to mention is how info-dumpy this gets. At first, I was like, magical secret society?? Hell yes, sign me up. Demons and aether and all of that? Bring it. And then we get introduced to the society, and things just get SO complicated so fast. I feel like I tried to absorb who everyone was, what they could do, and what the society as a whole meant all at once, and it made it so that my head started swimming and I couldn't keep track. There are. SO. MANY. CHARACTERS. Introduced in the span of a chapter, and then introduced later, and then more that just keep coming. I felt like a lot of them were unnecessary, and it made me angry a few times that I couldn't remember who was who. (I am not a person who forgets things like this typically...)

The Arthurian influence was also something that I actually didn't like. I feel like the idea of root and blood magic/aether is SO cool, as are lineages that pass on the ability to be a conduit for ancestors. But it just felt like there was so much going on, all the time, and it took away from the feeling of the book otherwise.

So, things that worked: commentary on racism, slavery, and the effect of systemic racism on the past and present; the exploration of grief; Bree and Sel; a solid twist. But overall, this wasn't my favourite.

Arthurian legend, mystery, romance, and magic! What could make this action-packed contemporary fantasy even more exciting? A 16-year-old girl who will stop at nothing to uncover the truth about her mother's death, even if it means pledging a dangerous oath to an ancient secret society. This outstanding series opener won the 2021 Coretta Scott King John Steptoe Award for New Talent. The audiobook, narrated by Joniece Abbott-Pratt, is among YALSA's 2021 Top Ten Amazing Audiobooks for Young Adults.

Okay, the beginning of the book was hard to get through. There were little to no answers, Bree's going through the anger, depression, and bargaining stages of grief almost on a rotation, and you're mostly just reading through it and thinking, "Seriously? Who are these people? And when is Bree actually getting her homework done?" The last 10-20 or so chapters of the book, though, caught me by complete surprise. Parts of it was still confusing, but the book moves lightning-fast towards the end. I'm still reeling from the shock, even though I half expected it. I can't wait for the second book.

Lots of love for this first installment in a teen fantasy series. The descendants of the Arthurian round table face demons. Sounds like a "typical" fantasy, right? Now look at the cover. See? The way that the African American lead character is overlaid on the tropes of a pretty standard fantasy world (centering European culture and all but ignoring cultures of other continents) is powerful stuff and shines a light on a need for MORE BOOKS LIKE THIS ONE.

I went through phases with this book. On one hand, it's gripping. I love that the author tackled so many issues (well) in a FANTASY book. I want to see more authors do this in the genre.

On the other hand, I appreciate that the author tried to create a sort of "found family" dynamic, but many of the characters weren't developed enough to follow this idea through. When the author honed in on a character, though, she characterized them well. It's just that there were too many characters that didn't get that level of attention.

Overall, I did enjoy this book. Pacing worked well. I was never bored. Like I said, characterization was done well for certain characters. I love the author's note at the end and that the book came from a very personal place. I look forward to the author's next work.

Amazing! One of my favorite books of the year, hands down!

Deonn's world building blends our modern existence with a magical realm that only a few can access. Different traditions use and treat that access with their own historical and cultural perspectives, weaving fantastical fiction tightly with modern experiences of racism, class, and self-identity.

You can read this as a fantasy, and be thoroughly entertained! You can also go a little deeper and read it as social commentary, and be amazed at how the two dovetail so neatly.

"You can study hard, but only if that’s how you want to do it." He gives me a wry smile. "No matter what you do, you gotta live your life, kiddo. You gotta be in the world. That’s what she would want you to do." He reached across the table to take both of my hands in his. "Don’t make your life about the loss. Make it about the love."

"You can study hard, but only if that’s how you want to do it." He gives me a wry smile. "No matter what you do, you gotta live your life, kiddo. You gotta be in the world. That’s what she would want you to do." He reached across the table to take both of my hands in his. "Don’t make your life about the loss. Make it about the love."

DarbyHicks thinks this title is suitable for 12 years and over