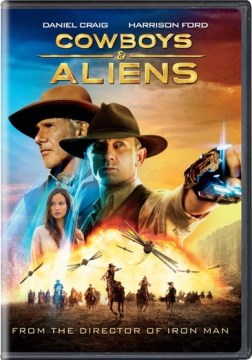 A stranger stumbles into the town of Absolution with no memory of his past and a futuristic shackle around his wrists. With the help of a mysterious woman and the iron-fisted Colonel Dolarhyde, he finds himself leading an unlikely posse of cowboys, outlaws, and Apache warriors against a common enemy from beyond this world in an epic showdown for survival.
Publisher: [United States] : Universal Home Video, [2011]
Call Number: DVD COW
Characteristics: 1 videodisc (118 min.) : sound, color ; 4 3/4 in. 4 3/4 in. digital,optical NTSC video file
Additional Contributors: Grazer, Brian 1953-
Orci, Roberto
Favreau, Jon
Craig, Daniel 1968-
Ford, Harrison 1942-
Wilde, Olivia
Rockwell, Sam
Universal Studios Home Entertainment (Firm)

I was prepared to be disappointed but wasn't. The melding of 2 genres was done fairly well. The way Daniel Craig played his part reminded me of Yul Brynner back in the day.

Daniel Craig is sure easy on the eyes. He obviously doesn’t have to say much, but standing in his chaps with his shirt open compensates for that. Well-known cast, but are they actors? Not a good story. Harrison Ford but not a good story. Harrison Ford being gruff is laughable. One reviewer says “It has cowboys. It has aliens. It does exactly what it says on the tin. Unfortunately, it rarely does anything more than that.” So true.

Watched this on Netflix before they removed it. Must have watched this several times. There are hidden gems of folklore and urban legend that is put together in an fun space western. If you look deeper into the movie, and do some video surfing online, you are probably going to find deeper meanings within the movie itself.
For example:
1) Amnesia - lapses of memory - sounds like abduction phenomenon.
2) Cattle destroyed at beginning of movie -- Cattle mutilation.
3) Gold extracted to power space-craft -- viewed some video something like that happening, probably an episode from Ancient Aliens
4) The strange lady chasing Craig character -- alien hybrid
5) Experiments done on people, going in holes underground -- Area 52 or urban legend of where missing people/abductees go.
6) Western and UFO -- The Aurora UFO crash.
7) People mesmorised staring into some white ball of light. -- have to check on that, but think there could be something there too.

This is what is fascinating to me about the movie. It's like a fun western movie that's loaded with all sorts of information that if you did some digging, that some aspects of the story line seem like it's based on actual things that may have been documented to happen.

I like westerns, Daniel Craig & Harrison Ford. I expected to love this movie. I didn't. Seemed pretty hokey to me. I didn't understand where Craig's character got the weapon.

Somewhat imaginative, bizarre, moderately amusing way to pass an hour and some change you had to be during something during. A person has a certain amount of time between birth and dying and something has to be done during it. Watching this movie is one of the things a person might choose to do as an alternative to doing something else.

Enjoyable mixed blend of two genres, that of science fiction and western. Has it's fair share of action moments and one must admit, this is a different type of movie altogether. Very good when you consider that A. Some people proclaimed westerns as a dead genre, and B.having something unique can only be a positive in terms of filmmaking. I liked Harrison Ford in this one as he comes off as the crusty outlaw and Daniel Craig as the central hero is equally effective in the role of the hero. The usual CGI effects are to be expected, but it doesnt deter from this being a watchable movie.

Right up there with Raiders of the Lost Ark; classic western elements and funny!

God don't care who you were son, only who you are.

Meacham: Whether you end up in Heaven or Hell isn't God's plan, it's your own. You just have to remember what it is.

Doc: I don't know much about boats, but I'd say that one's upside down.

Frightening or Intense Scenes: Getting Ambushed By Aliens!

bdls206 thinks this title is suitable for 13 years and over

leviathan1588 thinks this title is suitable for 15 years and over

lukeooo2 thinks this title is suitable for 9 years and over

A spaceship arrives in Arizona, 1873, to take over the Earth, starting with the Wild West region. A posse of cowboys and natives are all that stand in their way.