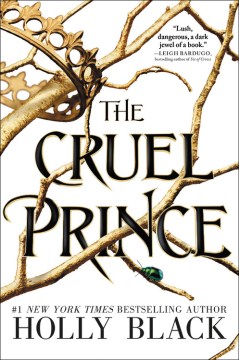 "Jude was seven years old when her parents were murdered and she and her two sisters were stolen away to live in the treacherous High Court of Faerie. Ten years later, Jude wants to belong there, despite her mortality. But many of the fey despise humans. Especially Prince Cardan, the youngest and wickedest son of the High King. To win a place at the Court, she must defy him--and face the consequences. In doing so, she becomes embroiled in palace intrigues and deceptions, discovering her own capacity for bloodshed. As civil war threatens, Jude will need to risk her life in a dangerous alliance to save her sisters, and Faerie itself."-- Amazon.com.
Publisher: New York : Little, Brown and Company, 2018
Edition: First edition
Copyright Date: ©2018
ISBN: 9780316310277
0316310271

This author has moved up in the literary world, going from the children’s series, The Spiderwick Chronicles, to this debut young adult trilogy involving the world of Fey. Most of us think Faerie Folk are cute and sweet. Not so! They are cruel, deceptive and tricksy. And poor Jude and Taryn, mortals who were spirited away at a young age, must negotiate a way to survive and thrive in this magical, cruel world.

Honestly I have no idea how this book is rated what it is and how it is as hyped and popular as it seems.

There is absolutely ZERO SUBSTANCE in this book.

Things happen, feels move barely, and life turns. The entire time I was trying to figure out what the goal, what the PLOT of the book was.

Sadly, I never found it. And a book without a plot isn't worth reading and continuing.

The only character that seemed to have any personality as at all was Cardan. He was the only one consistent in what he did and how he did it

as for Jude, oh sweet honey she drove me crazy. "Yes he's my daddy I need his approval" 3 hours later "he's not my father! What do I care what he thinks...." girl, PICK A LANE. Either you think something or you dont.

Not to mention that she is "good at" being a spy when we get no evidence of that. The end of the book makes her seem like she's been in the business for years and years when she's been in training for a handful of months.

Then she kills someone and it doesn't even matter. Honestly I think the author was tired of writing the character so she killed them off and they were never heard of. She was held to no consequences for murdering someone. Not to mention that it didn't seem to phase her at all when it was the first time she killed someone. With the little about her background that we do know it should have effected her more.

All of the characters were thrown into the book and then thought of no less. There was no growing, no development. She had them do things that we should have known we're their personalities but we didn't because she failed to mention that.

To sum up the book in one word: POINTLESS.

This book was absolutely not what I expected. The first half of the book... was borderline juvenile.. but the writing and world building and characters were all so fantastic I kept going.

I’m so absolutely glad I did. The power plays, the trickery and fun.. oh man. This book turned into something wonderful. No spoilers but book two kept the same thrill for me and this has turned into my favorite series this year.

The protagonist is unique.. powerful, clever, honest with herself... I loved her. The male lead... not really even a main character til the second half of this novel... is delightful. He is so fun to imagine... and I absolutely adore him.

The fae are terrifying.. as they should be, and beautifully described.. the author did an outstanding job making a world seem so intoxicatingly magical.... and dangerous... and lovely. Ahh I can’t get enough of this book and this series. I preordered book 3. Hope you give it a chance and love it as I did.

The ending of this book is really good! It was so good it had me bumped up to a 5 star for a bit, but the epilogue brought me back down. It sets up nice for the next book and I am looking forward to reading it.

Full of twists until the very end; this book will be an exciting ride for readers up until the very last page! Join Jude a mortal forced to grow up in Faerie, the land of the Fae as she tries to make a place for herself among a folk who will not accept her kind. Jude wants to become a knight to gain some power in the ruthless world she has to grow up in when she is offered a chance to become a spy for the next high king. See how it all plays out and jump into a world full of espionage, family issues, and enthrallment, with a bit of a dark side, read The Cruel Prince by Holly Black.

It's definitely worth the read. I suggest you pick up that book wherever you are. It'll leave wanting more.

More please! If you like a dark fantasy with beauty and treachery then this series is for you. The prince and many of the characters truly are cruel but that just makes our heroine stronger. If you Love a good kick-butt female protagonist and a hefty dose of revenge then I highly recommend Cruel Prince.

The writing felt really juvenile. Got about half way and quit.

green_cat_7425 thinks this title is suitable for 13 years and over

gurleena thinks this title is suitable for 14 years and over

OPL_KrisC thinks this title is suitable for 14 years and over

Seventeen-year-old Jude and her twin sister, Taryn, are mortals who have lived in Faerie since they were children, raised by the Faerie general who murdered their parents in order to retrieve his daughter, their half-sister Vivi. Despite this violent beginning, Jude longs to find her place in the High Court of King Eldred, and dreams of knighthood and acceptance. However, many of the high fey will never see a mortal as anything more than a servant, to be used and discarded at will. Worst among these is Prince Cardan, youngest of the High King’s sons, who seems to have a special hatred for Jude, and the way she had been raised as if she were part of the Gentry. When the High King announces that he will abdicate his throne, and pass the Blood Crown to one of his six children, Jude is caught up in political intrigues and violent betrayals, and is quickly reminded why the Faerie Court is no place for humans.

What they don’t realize is this: Yes, they frighten me, but I have always been scared, since the day I got here. I was raised by the man who murdered my parents, reared in a land of monsters. I live with that fear, let it settle into my bones, and ignore it. If I didn’t pretend not to be scared, I would hide under my owl-down coverlets in Madoc’s estate forever. I would lie there and scream until there was nothing left of me. I refuse to do that. I will not do that.