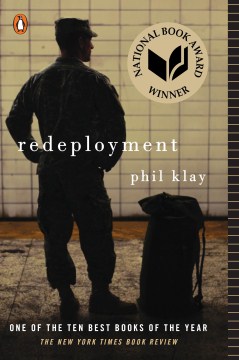 "Phil Klay's Redeployment takes readers to the frontlines of the wars in Iraq and Afghanistan, asking us to understand what happened there, and what happened to the soldiers who returned. Interwoven with themes of brutality and faith, guilt and fear, helplessness and survival, the characters in these stories struggle to make meaning out of chaos. In "Redeployment", a soldier who has had to shoot dogs because they were eating human corpses must learn what it is like to return to domestic life in suburbia, surrounded by people "who have no idea where Fallujah is, where three members of your platoon died." In "After Action Report", a Lance Corporal seeks expiation for a killing he didn't commit, in order that his best friend will be unburdened. A Morturary Affairs Marine tells about his experiences collecting remains-of U.S. and Iraqi soldiers both. A chaplain sees his understanding of Christianity, and his ability to provide solace through religion, tested by the actions of a ferocious Colonel. And in the darkly comic "Money as a Weapons System", a young Foreign Service Officer is given the absurd task of helping Iraqis improve their lives by teaching them to play baseball. These stories reveal the intricate combination of monotony, bureaucracy, comradeship and violence that make up a soldier's daily life at war, and the isolation, remorse, and despair that can accompany a soldier's homecoming. Redeployment is poised to become a classic in the tradition of war writing. Across nations and continents, Klay sets in devastating relief the two worlds a soldier inhabits: one of extremes and one of loss. Written with a hard-eyed realism and stunning emotional depth, this work marks Phil Klay as one of the most talented new voices of his generation"-- Provided by publisher.
Publisher: New York : The Penguin Press, 2014
ISBN: 9780698151642
Branch Call Number: eBook
Characteristics: 1 online resource
Additional Contributors: OverDrive, Inc

The best stories in this collection are the longer ones, where the author addresses the Iraq War from political or social perspectives. Phil Klay served in that war, and I felt that his opinions, through the stories’ characters, could be trusted.

After several interesting chapters the book becomes a drill on military acronymns. It seems to be written for other vets rather than the public. Became less interesting, so back to the library.

National Book Award winner--yes! Author is mature, introspective, a close observer of humanity under stress, and writes in a conversational style that attests to a highly developed understanding of human nature. Good portrayal of the consequences of our invasions of Afghanistan and Iraq.

One thing I noticed pretty quickly as I began reading the stories in Redeployment was the number of abbreviations. One sentence in the second story, Frago: “Once the CASEVAC leaves, it’s mostly waiting. I give the LT my SITREP. He passes it on to Ops…” There’s no glossary, I noticed. In fact, the story “OIF” plays abbreviation games with us. It begins, “EOD handled the bombs. The 08s fired DPICM. The MAW provided CAS. The 03s patrolled the MSRs. Me and PFC handled the money.” What I took from this was that I’m very much an outsider; I don’t know the language; I haven’t had the experiences. And that comes up in some of the stories: Civilians really don’t know what these veterans go through. This book gives us a peek inside their world, but it’s clear, it’s alien to most of us; we’ve been placed in someone else’s world.

The writing is sparse, much like the dessert, without a lot of description of the environment. Only a few of the stories involve actual battles, or encounters with insurgents. Each story is told in first person, each from a different viewpoint. The first story, “Redeployment,” describes how hard it is for a marine to come home, how disorienting. The characters and dialogue are very authentic. The writer’s voice and style are impeccable.

I don’t believe there was an overt political perspective, though others find one in the stories. But there is definitely cynicism, both overt and in undercurrents. The most absurd, Heller-like story, and one of my two favorites, is “Money as a Weapons System.” The whole story is about a Foreign Service Officer who is trying to do something useful in the country, something that will be of consequence. The speaker says at the beginning, “I remember Condoleezza Rice declaring that civil administration and police functions had no place in a military campaign. ‘We don’t need to have the 82nd Airborne,’ she said, ‘escorting kids to kindergarten.’ In 2008, around the time I got there, the 82nd Airborne was building greenhouses in Tikrit.” The story is about the bureacratic hurdles and logistical dead ends the Foreign Service Officer encounters. One corporate executive with power and influence believes that baseball can change the Iraqi culture, sends uniforms and equipment, and demands that Iraqi kids be taught the game.

There are common themes. One is the sense of isolation expressed by so many of the speakers, either their own, or in their descriptions of their comrades. The most moving story, and my other favorite, is “Prayer in the Furnace,” told by a chaplain. It’s about his difficulties advising men who are sent into harms way, often on futile missions, trying to give them some spiritual guidance. And it’s partly about his futile struggle to open an inquiry into a company commander that has encouraged a general hatred of all Iraqis, with no distinction between civilians and insurgents.

Each story is a microcosmic view, a small piece of a chaotic, indecipherable puzzle. There is no holistic vision, because interpreting the whole picture is impossible. The last story expresses this best. “Ten Kliks South” is about an artillery team that is told they took out a group of insurgents. One of the men wants to see evidence, see bodies. They fire volleys at targets miles away, never see the results. In a way, this seems like a metaphor for the book, in that no one ever gets to view the “larger picture.”

Brutal and honest. I felt Klay was at his best in the first story, "Redeployment," for which the book is named.

"It’s not that there’s one thing I want people to understand about this war so much as I want people engaged with it. If you’re an American citizen, it’s your war. It’s not the soldier’s war, or the Marine’s war. The soldier and the Marine do not issue themselves orders." - Phil Klay in a Q&A.

The writing and storytelling here are excellent. The collection has a rawness and earnestness that winds you up and stays with you for days. What is the emotional reality of combat in the modern age? Violent and disorienting, of course, but also banal, chaotic, and inane—all of it captured simply and without ornamentation in Phil Klay’s debut collection. Don't pity the soldier, the veteran, it seems to say; pity oversimplifies the experience. I came out of reading this more aware and filled with respect. No heroes here, no lionizing, or glossing over. Just people dealing with the experience and the aftermath. A disquieting emotional punch for sure, but we should be disquieted, we should be unnerved. The war may be history, officially for the ages (March 20, 2003-December 15, 2011), but it still resonates—as it should—and it haunts many more others.

These stories are thoughtful, beautiful and well-crafted, but they and I were a stylistic mismatch. Klay uses a very spare, understated prose style that made it hard for me to immerse myself in the story. Also, as other reviewers have pointed out, there is a "sameness" in the voices of some of the narrators that makes it hard to distinguish their stories from one another. My favorites were: Money as a Weapons System and A Prayer from the Furnace.

I followed the beginning very well but the more I read, the more I felt that I was wandering into territory that I had no interest in.

I have not been to war and I don't need to do so to be fully aware of what horrible things people can and will do to each other, children, animals and all innocent beings.

I like The Things They Carried much more than this book. I wanted to like this book but I hated the voice and the obsession with sexuality.

Good depiction of men/women of all ranks, and the complete F--- ups that go on, especially with the gross corruption that is tolerated in that culture. Seems to be Iraq's version "The Things They Carried" one of the Viet-nam's era best book. Must read, no matter how you stand on the Iraq conflict.

BloomFree thinks this title is suitable for 14 years and over