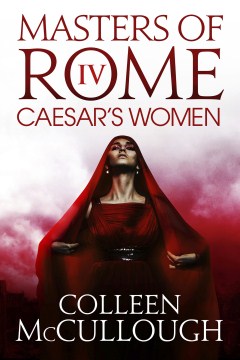 I can't believe they don't have a hard copy of this!
I'm tacking this review onto all of the books in McCullough's Masters of Rome series:

I'm interested, in a layman's way, in the history of Rome, so this entire series (books listed below) was riveting for me.

Masters of Rome series:
1. The First Man in Rome (1990) - The narrative begins in 110 B.C. with the story of Gaius Marius.
2. The Grass Crown (1991)
3. Fortune's Favourites (1993)
4. Caesar's Women (1995)
5. Caesar (1999)
6. The October Horse (2002) - Originally intended to be the final book of the series, the narrative carries us through Julius Caesar's death on the Ides of March in 44 B.C., and ends after The Battle of Philippi in 42 B.C., the final battle in the Wars of the Second Triumvirate between the forces of Mark Antony and Octavian (Caesar's great-nephew, and adopted son) and the forces of the tyrannicides Marcus Junius Brutus and Gaius Cassius Longinus.
7. Antony and Cleopatra (2007) - Somehow McCullough was persuaded to add one more book to the series, tying up loose ends, perhaps? Or maybe it was just hard for her to imagine life without The Masters of Rome? I had secretly hoped she'd carry on further into the reign of Augustus.

Julius Caesar appears in each of the first six books. If you're interested in popularized Roman history, this is a treasure. The writing is good, if not quite up to the standard of Robert Graves two volume set "I, Claudius," and "Claudius the God," or Robert Harris' Cicero trilogy. If you have read and enjoyed any of these, however, you MUST read them all - in chronological order, of course. It is particularly interesting that McCullough seems more or less in the Caesar-worshipping camp. He was a prodigy; he was too good at too many things, which in the end had a lot to do with his downfall. But what a magnificent creature he was!

However, Cicero was Caesar's mortal enemy, and Robert Harris' books tell much of the same story as we find in McCullough - from a diametrically opposed point of view.

Be forewarned, these books are packed with lengthy Roman names, so will in some ways read like Russian novels. Hard to keep track of the cast of characters without a program, which the author naturally provides, along with detailed hand-drawn maps, and her own line-drawing fanciful portraits of the principle characters. Not very good drawings, but somehow rather endearing. She was quite a character herself.

P.S. It gets easier to keep the characters straight on the third and fourth readings. Yes, the books are that good ………