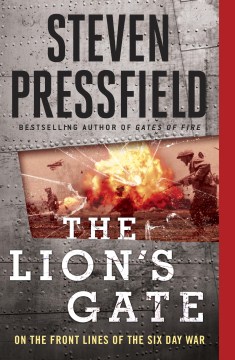 On the Front Lines of the Six-Day War

In war soldiers perform feats of valor of which they never, before they do them, believed themselves capable.

The Arab intellectual is the loneliest man on earth, for he is trapped in the void between reason and faith.

To the Arab; honor is all.

We looked death in the eye, but death did not look away. He took as many of us as he wanted.

I would rather have to rein in the over eager warhorse than to prod the reluctant mule.

The IDF and IAF have been built upon the principles of speed, aggression, and audacity.

This will be a war of extermination and momentous massacre which will be spoken of like the Mongol massacres and the Crusades.

An excellent story that uses little snippets of events from different persons' points of view. Educational and lets the reader know how hard the Israelis had to fight. Includes perspectives from Generals to Privates. Highly recommended.

Truly an excellent read. This book tells the story of the Six Day War, and partially also of the '48 War of Independence and '56 Suez War, in much detail from different points of view - all in first person tense from people on the front or leading the action. This makes for an exhilarating, interesting, inspiring, exciting, and emotionally powerful read that is hard to put down. The reader feels as they are with "A" company of Battalion 71 as they enter the old city of Jerusalem, a fighter pilot in Operation Moked as they fly over the Delta, and a tank commander pursuing El Arish through the Jiradi Pass. A reader will also learn much about the history of Israel, the country's culture, and international politics.

A nation is born in blood and purchases with blood its right to stand in the ranks with other nations.