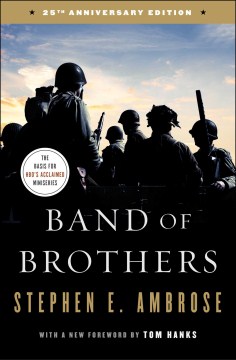 Baker & Taylor
A look at the men of E Company and their exploits during World War II describes how they parachuted into France early D-Day morning, parachuted into Holland during the Arnhem campaign, and captured Hitler's Bavarian outpost. Reissue. (A ten-hour HBO miniseries, produced by Tom Hanks & Stephen Spielberg)

They came together, citizen soldiers, in the summer of 1942, drawn to Airborne by the $50 monthly bonus and a desire to be better than the other guy. And at its peak—in Holland and the Ardennes—Easy Company was as good a rifle company as any in the world.

From the rigorous training in Georgia in 1942 to the disbanding in 1945, Stephen E. Ambrose tells the story of this remarkable company. In combat, the reward for a job well done is the next tough assignment, and as they advanced through Europe, the men of Easy kept getting the tough assignments.

They parachuted into France early D-Day morning and knocked out a battery of four 105 mm cannon looking down Utah Beach; they parachuted into Holland during the Arnhem campaign; they were the Battered Bastards of the Bastion of Bastogne, brought in to hold the line, although surrounded, in the Battle of the Bulge; and then they spearheaded the counteroffensive. Finally, they captured Hitler's Bavarian outpost, his Eagle's Nest at Berchtesgaden.

They were rough-and-ready guys, battered by the Depression, mistrustful and suspicious. They drank too much French wine, looted too many German cameras and watches, and fought too often with other GIs. But in training and combat they learned selflessness and found the closest brotherhood they ever knew. They discovered that in war, men who loved life would give their lives for them.

This is the story of the men who fought, of the martinet they hated who trained them well, and of the captain they loved who led them. E Company was a company of men who went hungry, froze, and died for each other, a company that took 150 percent casualties, a company where the Purple Heart was not a medal—it was a badge of office.

The plot-theme is leadership seen through the experiences of 2LT (eventually Major) Dick Winters. The corollaries included the importance of training, and the bonds that we form by facing challenges together. The HBO series was an honest instantiation of the book. The book provided more depth and detail. The advantage to the DVDs is being able to watch the words and run it back to catch what you missed. I renewed the book twice and checked it out again. I cannot imagine seeing this once on HBO-TV and getting half as much from it.

Producers Tom Hanks and Steven Spielberg hired good writers and directors who developed and projected additional dimensions from Stephen Ambrose’s history. But that history is the foundation. And Ambrose relied on other works such as "The Face of Battle" (John Keegan; Penguin), "The Warriors: Reflections on Men in Battle" (J. Glenn Gray, University of Nebraska Press), and "Rendezvous with Destiny: A History of the 101st Airborne Division" (Leonard Rapport and Arthur Northwood, Jr., Infantry Journal Press).

In the Acknowledgements and Sources, Ambrose explains how the book came to be written in response to criticisms from the men of Easy Company. Ambrose was employed by the Eisenhower Center at the University of New Orleans. At the time he met the men of the 506th Parachute Infantry Regiment, he was working on a biography of Richard Nixon. As a result of that initial meeting, Ambrose met the men many times to record and review the interviews that are the bedrock of the book and therefore the HBO series.

Based on the personal remembrances that highlight each episode, actor Damian Lewis (English, upper class, and Eaton according to IMDB) did yeoman’s duty portraying Richard Winters. The other actors all created or re-created their characters well enough, even though I feel that they were all too old for their roles. Acting is hard work and it takes practice. So, finding competent teenagers for this was apparently impossible. But that’s who they were: kids. By the time they jumped at Normandy, 1LT Dick Winters was 26. Their nemesis Capt. Herbert Sobel was thirty when he drilled them at Camp Toccoa.

Capt. Sobel (see Wikipedia for a brief biography) gets better treatment in the book than in the movie. According to Wikipedia, it was his son, Michael, who came to his defense in the courtroom of history. In the book, some of the men of Easy Company said that his training at Taccoa kept them alive in Europe. In the movie, we see only the martinet who can neither read a map himself, nor allow his NCO to do it for him.

On another level, the men of Easy Company were just being reflective and gracious. No one had to specially thank Major Dick Winters. His leadership was humane, just, fair, forthright, foresighted, and insightful – and demanding. He was a good combat officer. But why was he? We can investigate all of the parameters of personality—all of the aspects of environment and heredity—and never reduce the problem to a single cause or even to a matrix of elements. The fact remains that he was.

As an extreme circumstance, war sets the stage for drama, and every story is a mirror. Some reflect better than others. As an epic, the HBO production of Band of Brothers is a hallway of dark and light, metal and glass, orthogonal and angular. The book is a map of that concourse.

Wowowo. I am a huge WW II story lover and this book is awesome. A different writing style and very personal. Great read. Gut wrenching at times.

"Band of Brothers" is overall a very informative book about the experiences of Easy Company throughout World War II. The company is highlighted by the incredible leadership skills of Richard Winters, their commanding officer. Action scenes in the book are accurately described and all equipment names are obviously well-researched. Most of the battle sequences have actual accounts from the veterans which makes for a depiction that feels very real. Additionally, character traits are in-depth and make for an easier connection to real life.

The book band of brothers is a very good book I like it a lot because it has to deal with world war 2 and it tells you someone side of the story like what they have been through and what they had to do as a mission and what they have practiced for ww2 to take back the beach Normandy beach from the Nazis but it’s a really good book I really like it and it’s coming from a person that does not like to read a lot and if you have a chance to pick up Band of brothers take it as I said before I really like this book and it has a lot of details in the book.

I thought it was a good book years ago when I first read it, before the miniseries. I always enjoy books my Stephen Ambrose as his work always have a more personal feel to it. He also covers of the general experience of your average soldier than most authors. If you enjoyed the series, you will love the book.

Awesome book about an airborne company that fought in most of the major battles of World War Two and in most cases came out on top. Highly recommended and Freedom isn't Free!!

Really good book. I really liked the show too. It really shows all of are heroes in World War 2. Rest In Peace all of our fallen heroes.

yellow_dog_3293 thinks this title is suitable for 15 years and over