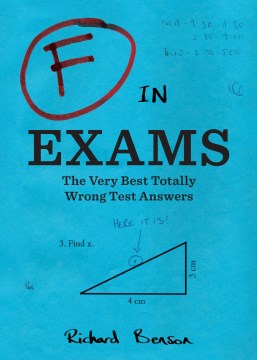 This work is a collection of some of the more creative and hilarious ways that students have tackled challenging exam questions. "F" stands for "funny" in this perfect gift for students or anyone who has ever had to struggle through a test and needs a good laugh. Celebrating the creative side of failure in a way we can all relate to, this book gathers the most hilarious and inventive test answers provided by students who, faced with a question they have no hope of getting right, decide to have a little fun instead. Whether in science (Q: What is the highest frequency noise that a human can register? A: Mariah Carey), the humanities (Q: What did Mahatma Gandhi and Genghis Khan have in common? A: Unusual names), math, or other subjects, these 250 entries prove that while everyone enjoys the spectacle of failure, it's even sweeter to see a FAIL turn into a WIN. --From publisher.
Publisher: San Francisco : Chronicle Books, 2011.
ISBN: 9781452107462
1452107467

The race of people known as Malays come from which country?
-Malaria
===
Name six animals that live specifically in the Arctic.
Two polar bears + four seals
===
Inhabitants of Moscow are called…
-Mosquitors
===
Name one of the primary products of the Hawaiian Islands.
Grass skirts and flower necklaces
===
What is the collective name given to the inhabitants of the Philippine
The Ogkustubes
===
Where was the Declaration of Independence signed?
At the bottom
===
How high is Mount Everest?
Depends on how much snowfall it has on the mountain top
===
The Narmada and the Tapi river valleys are said to be old rift valleys. What is a rift valley?
Valleys that have fallen out after an argument
===
Why was the Berlin Wall built?
Germany was competing with China
===
Summarize the major events of the Cold War.
It started off by someone throwing an ice cream cone and then someone threw a popsicle back

What were the consequences of the Cold War?
Everyone got really hot what with all that running, fighting in the snow with snowballs and riding horses pulling sleds. No wonder Santa Claus has rosy red cheeks.
===
Who were the Bolsheviks?
People led by Linen
===
Explain the word “autocracy.”
A country with a lots of automobiles
===
Explain what is meant by the word “dictator.”
Someone who reads out loud
===
Upon ascending the throne the first thing Queen Elizabeth II did was to…
Sit down
===
What was the largest threat to world peace in the 1980s? Summarize the key developments of the Industrial Revolution.
Heavy Metal music because it was very loud
===
What does the Statue of Liberty represent?
A green lady holding up a large glass of wine. She is wearing a crown. She is the Queen of America
===
Name two of the classes that existed in medieval England.
History class and Geography Class

Here is the very best:

Explain the phrase “free press.”
-When your mom irons pants for you.
Explain the word “wholesaler.”
-Someone who sells you whole items, e.g. a whole cake.
===
Claire used good body language at a job interview. Can you think of three examples of good body language that Claire may have used?
-Pole Dancing
-The moonwalk
-The Bolero
===
Express the term “stereotype.”
-It is the kind of CD player you own.
===
Explain what is meant by the term “pastoral farming.”
-It's a farm run by reverends
===
Define the phrase “commercial farming.”
-It is when a farmer advertises his farm on T.V. to get more customers.
===
What scale do seismologists use to measure the force of earthquakes?
-A very strong one (not glass).
===
What do we call a person forced to leave their home, perhaps by a natural disaster or war, without having another home to go to?
-Homeless :(
===
Name the smaller rivers that run into the Nile.
-The Juveniles.

What is a fossil?
-A fossil is the remains of an extinct animal. The older the fossil, the more extinct the animal is.
===
What happens when your body starts to age?
-When you get old, your organs work less effectively and you can become intercontinental.
===
Is the moon or the sun more important?
-The moon gives us light at night when we need it. The sun only provides light in the day when we don't. Therefore the moon is more important.
===
Name an environmental side effect of burning fossil fuels.
-Fire.
Describe what happened during the “big bang.”
-A lot of noise.
===
Why do some researchers believe that living close to a cell phone tower might cause poor health?
-You might walk into it.
===
Give an example of a step-up transformer.
-An exercise machine.
===
Give three ways to reduce heat loss in your home.
-Thermal underwear
-Move to Hawaii
-Close the door
===
Change 7/8 to a decimal.
- 7.8
===
To change centimeters to meters you ____.
-take out centi.

What does “terminal illness” mean?
-When you become ill at the airport.
===
Define enzyme.
-Superhero of the CELL.
Define coenzyme.
-Enzymes' sidekick.
===
What happens during puberty to a boy?
-He says goodbye to his childhood and enters adultery,
===
Karen goes into her garden one morning and finds the leaves covered in a sticky substance. What is this substance?
-When the leaves sit in the sunshine, they get hot and it makes them sweat.

Describe the chemical differences between H2O and CO2.
-H2O is hot water, CO2 is cold water.
===
What is a vibration?
-There are good vibrations and bad vibrations. Good vibrations were discovered in the 1960s.
====
Explain the concept of homeostasis.
-It is when you stay at home all day and don't go out.
===
In the Hawaiian Islands there are around 500 different species of fruit fly. Give a reason for this.
-There are approximately 500 varieties of fruit.
===
Adam cuts his arm. Blood gushes out and is red in color. What does this show?
-He is not a robot, he's a real boy.

Jeff has been asked to collect data about the amount of television his friends watch. Think of an appropriate question he could ask them.

How much TV do you watch?

weres x? there it is

If you have not hear about it yet and want a good laugh, check out this book. You can open the book to any page and you will just start laughing and the creative answers that students have wrote down when trying to answer their exam questions. Very light and amusing, I liked it a lot. (submitted by DS)

Read this thin booklet awhile ago and enjoyed it more this time. Out of all those problems and answers, may be a third are worth an "A" grade. The rest pass as those jokes/humor you can find from the internet. See those "A" grade Q&As in "Quote."

The F for Effort was by far the best. But this is still howlingly funny!

Will get you a laugh or two!

Cheesy jokes my momma told me 40 years ago, slightly updated. A nice way to kill an hour. Nothing more.

some of the stuff ive already seen but still kinda funny

Just seemed slapped together. Not anything very humerous.

You can find a lot of the Q&As by searching for the book's images:

The funniest wrong answers ever!

Loading...
IndyPL owns a similar edition of this title.