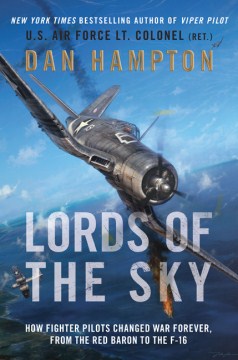 Lords of the Sky

Fighter Pilots and Air Combat, From the Red Baron to the F-16

"By the New York Times bestselling author of Viper Pilot, former USAF F-16 legend Dan Hampton tells the thrilling story of how fighter pilots have ruled the skies for 100 years, from the Red Baron to today's supersonic jets"-- Provided by publisher.
"By the USAF F-16 legend behind the bestselling memoir Viper Pilot, this is the first comprehensive history of fighter pilots and air combat--a unique, riveting look at the aces of the sky, their machines, their most daring missions, and the epic conflicts they shaped, from the trailblazing aviators of World War I to today's supersonic jets. Lords of the Sky is a thrilling history of the fighter pilot, masterfully written by one of the most decorated aviators in American history. A twenty-year USAF veteran who flew more than 150 combat missions and received four Distinguished Flying Crosses, Lt. Colonel Dan Hampton draws on his singular firsthand knowledge, as well as groundbreaking research in aviation archives and rare personal interviews with little-known heroes, including veterans of World War II, Korea, and Vietnam. In a seamless, sweeping narrative, Lords of the Sky tells the extraordinary stories behind the most famous fighter planes and the brave and daring heroes who made them legend. In the Great War, aces such as Manfred von Richthofen ('The Red Baron'), Eddie Rickenbacker, and Roland Garros faced horrific survival rates and became romantic heroes. The Second World War saw the RAF locked in a struggle for the fate of civilization during the Battle of Britain; on the Eastern Front, the German Luftwaffe and Soviet Air Force grappled in some of the fiercest and bloodiest air battles in history. In the Pacific, Japanese pilots terrorized Asia, culminating in their attack on Pearl Harbor. American flyboys quickly became instrumental to the Allies' ultimate victory, ravaging the enemy's navy, providing life-saving air support for ground troops, escorting bombers, and dogfighting with Japanese Zeros and Nazi Messerschmitts. During the Cold War, conflicts in Korea and Vietnam featured the dawn of the jet age, in which American pilots battled Soviet-made MiGs and increasingly sophisticated anti-aircraft weaponry. Hampton then draws on his own experience
as an F-16 pilot who fought in the 1991 and 2003 wars against Iraq to bring to life the dangers and demands of today's modern fighter pilot.Here are the stories behind history's most iconic aircraft and the aviators who piloted them: from the Sopwith Camel and Fokker Triplane to the Mitsubishi Zero, Supermarine Spitfire, Nazi Bf 109, P-51 Mustang, Grumman Hellcat, F-4 Phantom, F-105 Thunderchief, F-16 Falcon, F/A-18 SuperHornet, and beyond. Here, too, are the Lafayette Escadrille, Flying Tigers, RAF Eagles, Wild Weasels, and other legendary units. Throughout this definitive history, Hampton clarifies the astonishing debt we owe to these daring Lords of the Sky who have ruled the air for more than a century"-- Provided by publisher.
Publisher: New York, NY : William Morrow, An Imprint of Harper-Collins Publishers, [2014]
ISBN: 9780062262103
Call Number: eBook
Characteristics: 1 online resource text file
Additional Contributors: OverDrive, Inc. - Distributor

As always, fighting men are instruments of policy, not the creators of it, ...

War, however, turns all fighting men into professionals, even if only temporarily.

Technology had always been key to German success.

Assuming that your enemy will do as you expect is always dangerous,...

Good overview of the history of air combat, and from a fighter pilot, no less. A very enjoyable book.

A very well written concise history of all the notable combat pilots from the Great War to the second Iraq conflict. It will broaden your knowledge and give you interesting insights into their personalities and achievements.

A very well written concise history of all the notable combat pilots from the Great War to the second Iraq conflict. It will broaden your knowledge and give you interesting insights into their personalities and achievements.

tigershark855 thinks this title is suitable for 13 years and over