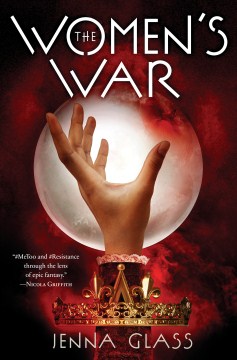 Awesome story with kickass women, effective world building, and room for more story to come. This tale about a brutal land and the patriarchy who think they control the women is spellbinding—magic abounds. But they are not fluffy “glamour” spells; these are useful, practical, and sometimes deadly. Read it exclusively to the end. Satisfyingly unsaccharine closing that tied up this book while leaving room for more books to come.

This book could have been amazing.

Instead, it spends the entire 500+ pages setting up an amazing plot and then ending the book exactly where the action begins, with a one page epilogue that gives the reader nothing.

The book jumps right into the meat of the story. The spell is worked and completed within the first 30 pages. And then from there, the book is just a lot of men telling women they are lesser beings, and women being confused and put off by the idea that they don't have to be second class citizens. Most of the "plot" revolves around two men convincing women of things- on the good side, Tynthnanal basically gives the head of the abigails permission to not live in misery and tells his sister to take charge (despite her emphatically not wanting to); on the evil side, Delnamal just reminds everyone what women deal with in the real world on a daily basis. Nobody challenges him whatsoever, in fact. The only attempt at challenging him comes in the last 100 pages of the book, and even then...nothing happens. They meet on a field and he throws a head at Alys and then that's the end of the book.

That should have been the halfway point, at latest. So much of this book is wasted, when the real plot- the real struggle, the real interesting story- is where the book ends. Is there supposed to be a sequel? Even if there was meant to be one, why did I just waste 500 pages of reading time reading what could have been less than 100 pages of set up?

The magic in this world is also very, very complicated and very badly explained. I love a good complex magical world, but without understanding how or why it is the way it is makes it become a hindrance to one's plot very quickly.

The writing was good and the idea was sound. But it's like the author herself had no idea how to imagine a world in which women were equal to or had power over men, so she just wrote about the humdrum realities of men ignoring women and women....not really doing anything to combat that. They (for real) just go live in the desert and avoid them as much as possible.

Then there are these weird anticlimactic moments, all in regards to men. She spends hundreds of pages having characters tell other characters how awful this man is, or how this man does these terrible things, and then you meet the men, and it's almost as if the author is intentionally trying to say "Hahahaha women don't know what they're talking about! Men aren't that bad! Just see things from their perspective!"

That's exactly the problem with the real world. This fantasy novel did nothing to explore or challenge it, much less consider radical subversion by ACTUALLY creating a world in which women have more power than men. This whole book is a huge missed opportunity for what could have been an actual epic, radical fantasy. Instead, it's well written disappointment.

eta: I learned this will be a trilogy. I would not waste my time on the second book after the first. Having this much evidence of her writing, I could only assume the second book would be just as anticlimactic and unsubstantial as the first.