Saved Searches Advanced Search
​Out of an abundance of caution due to Covid-19, Library branches may close without notice for cleaning. See our up-to-date status of branches​.
Print 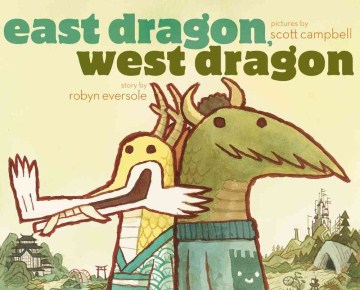 East Dragon and West Dragon are suspicious of one another although they have never met, but when the western king is captured in the Eastern Kingdom and West Dragon goes to rescue him, they find they have much in common.
Publisher: New York : Atheneum Books for Young Readers, 2012.
Edition: First edition.
ISBN: 9780689858284
0689858280

East Dragon and West Dragon live very far apart, and look very different. However, when there is trouble between their kingdoms, the two come together to help each other, each in their own special way.

In the picture book world dragons are in danger of being the poor man’s dinosaurs. You’d think the whole breathing fire aspect would give them an edge and you would be wrong. For every dragon book there are fifty dinosaur titles to be had. Little wonder then that I’m so pleased to encounter East Dragon, West Dragon. It’s just the best possible combination of fun story, sterling text, relatable characters, and deeply amusing art. So slot this title firmly in the back of your mind. The next time a little kid asks you for dragons, you’ve got yourself an ace up your sleeve.

Our two heroes in this story are East Dragon and West Dragon. East Dragon is our Felix and West Dragon our Oscar. While East Dragon lives a clean and tidy life with lots of dragon siblings and an emperor who truly appreciates dragon culture, West Dragon lives a single messy life dealing with a pesky local king and his equally pesky knights. The two dragons know of one another but each is sure that the other is the more fearsome of the two. One day, West Dragon can’t take the marauding knights a second longer (they interrupted his nap) so he gives them a map that will lead them to adventures. In their travels they run across the emperor who is extremely nice and offers them all his hospitality. Yet what do the pesky knights do in return? They take one look at the local dragon population and attack! Not thrilled at his rude guests, the emperor has the whole lot of them thrown into prison. West Dragon, hearing of their plight, resigns himself to saving them and along the way encounters (and is himself saved by) East Dragon. After much thought the two realize that neither dragon is any better than the other and the dragons, knights, and even the emperor himself all head over the sea to West Dragon’s place for food, fun, and maybe even a little karaoke.