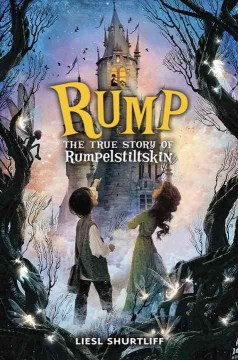 The True Story of Rumpelstiltskin

In her debut novel, Liesl Shurtliff recounts the real story of Rumpelstiltskin as narrated by the “villain” himself, 12-year old Rump. Rump endures a hard life, growing up poor and orphaned in a destitute village dominated by a cruel and greedy miller and his brutish sons. Rump is constantly bullied for his name, his small stature, and his bad luck finding gold in the mines. Without gold to buy food from the miller, Rump and his elderly Gran are perilously close to starving. In the absence of a complete name, Rump believes that he will never have a promising life. After all, in The Kingdom, a good name isn’t just what people call you, it is also full of meaning and power which shapes your destiny. Unfortunately, Rump does not have a good name.

However, Rump does have a stalwart friend in Red, a loving Gran, and perhaps a change of luck when he finds his mother’s old spinning wheel. Gran forbids him to touch it, but Rump is drawn to it, like pixies to gold.

Rump unexpectedly discovers that he has a gift for spinning straw into golden threads. Red and her grandmother warn him that such magic is dangerous, and they’re right. With every spin of the wheel, Rump weaves himself deeper into a curse, the same curse that had entrapped his mother before him. To break the spell and change his destiny, Rump undertakes a perilous quest, battling wild magic, pixies, trolls, and foolish humans. The odds are stacked against him, but with ingenuity, courage, unlikely friends, and a cheeky sense of humor, Rump just might be able to salvage his name and his destiny.

With an appealing hero, thrilling action, and lots of humor, this book is recommended for fans of series such as Hero’s Guide by Christopher Healy, The Land of Stories by Chris Colfer, The Sisters Grimm by Michael Buckley, and Whatever After by Sarah Mlynowski.

This is my FAV book now! It really changed my life. What was a depressing tale turned into a life-changing story/experience for
Rumplestiltskin. I TOTALLY recommend reading this book if you
have not-so-good self esteem and if you want to find your destiny.
(I'm still trying to find my destiny.)
No matter what trials and bullying he faced, he found the good in life afterwards and his friends and aunts welcomed him into theirs'.
I give this book 5 stars!

Good book. I really liked how she didn’t change the story, she just made it better and easier to understand.

Such a sweet and adorable story about a 12-year-old boy trying to find his destiny. Definitely highly recommended, I loved it so much! I look forward to reading more books by Liesl (doesn't she have such a beautiful name?) Shurtliff.

I'm a great-grandpa and this book is a winner for the reader and the author for her first book. Can't wait to also read "Jack" and "Red". Very nice redo on the classic ferry tale with many nice twists and humor. I will never look at a gnome the same way again. And the kind of friendships established in the story are both timeless and contemporary.

This is the most surprisingly awesome book. I didn't expect much going in but I was seriously blown away. It did such a wonderful job of expanding the classic story. Do yourself a favor and reread/rewatch a version of the classic Rumpelstiltskin before you start Rump. You won't regret it.

What if your name is your destiny? What if your name is Rump? Our hero is bullied for his unfortunate name, but finds comfort in his friend Red (who you might know!) and his grandmother. When he discovers a magical talent, he begins a quest to discover his true destiny (and the rest of his name). Fans of the Land of Stories and The Sisters Grimm series will love this smart, well-written tale that takes place in a land faraway with your favorite folk and fairy-tale characters.

I just got done reading it today it was so interesting I really liked it , and what he went though,his mom ,grandmother ,father ,the pixies trolls the wheel his aunts opal the boys the miller the king ,red

Interesting retelling of a classic fairy tale from Rumpelstitlskin's point of view. worth reading.

We loved this book! I picked it up as a read-aloud for the munchkins and started to peruse the first chapter. I looked up about 2 hours later and had finished the entire book in one sitting. The characters were endearing and offered an interesting twist to the classic fairytale, there was a lot of humour and good messages to internalize. The kids (6 & 11) liked it just as much as I did.

In a magic kingdom where your name is your destiny, 12-year-old Rump is the butt of everyone's joke. But when he finds an old spinning wheel, his luck seems to change. Rump discovers he has a gift for spinning straw into gold. His best friend, Red Riding Hood, warns him that magic is dangerous, and she’s right. With each thread he spins, he weaves himself deeper into a curse.

To break the spell, Rump must go on a perilous quest, fighting off pixies, trolls, poison apples, and a wickedly foolish queen. The odds are against him, but with courage and friendship—and a cheeky sense of humor—he just might triumph in the end.