Saved Searches Advanced Search
Our online catalog is currently experiencing some issues and errors that we are working to resolve. Thank you for your patience.
Print 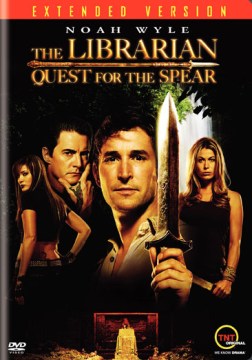 Quest for the Spear

A geeky librarian is hired by the prestigious Metropolitan Library, keeper of such top-secret treasures as Excalibur and Pandora's Box. When the Serpent Brotherhood, seeking world domination, steals one of three parts of the magical Spear of Destiny from the library, only this librarian, aided by a gorgeous bodyguard, has the knowhow to thwart their plan. But does he know how to be a hero?
Publisher: [United States] : Warner Home Video, 2005.
Edition: Extended version.
ISBN: 9780780649583
0780649583

Alternative Title: Quest for the spear

Here is the original Librarian before the TV show reboot. One librarian, one library. Adventure ensues.

Very nice introduction to "The Librarian" movies and then the series on TNT/Hulu. Well-casted, clever, humorous, finally celebrating geeks everywhere!

love Noah Wyle and the Librarian only wish there were more movies done in this series.

Very cheesy! They tried to do an action/ suspense movie as a comedy and it really does not work. I think it would be too advanced for little kids, who might not understand the background and signifigence of the Holy Grail or the Golden Goose or other items at the Library. Watch it only if you want to see Bob Newhart in a fist fight.

Fun family entertainment. This is the 1st chapter of The Librarians series. I watched them out of order and still enjoyed the adventures. I wish this series was running on public TV. This is a less expensive beginner Indiana Jones story style. Bob Newhart's 1st ever fight scene!

Ridiculously cheesy in the best way, I was very entertained! I loved the main character, a bumbling but brilliant librarian who just wants to learn but instead gets adventure thrust upon him whether he likes it or not. It's perfect for lots of comedic moments.

Both the movies and the series are a combination of Buffy The Vampire Slayer and the 80's tv show Friday The 13th (having nothing to do with the Jason serial killer franchise) and/or the remake Warehouse 13. Yes, there is a little Indiana Jones, but fans of both Buffy (and Angel) and Friday the 13th and Warehouse 13 will love this show!

I love this for its nuttiness, irony, and for all the things it doesn't have: coarseness, violence, nasty words. It could've been made by the BBC.

This was just okay...CGI at it's beginning? I'm spoiled now...loved to see Bob Newhart and Jane Curtain. Just too cheesy for my taste.

Cheesy, lame, low-budget (obviously fake sets) spoof on Indiana Jones (listen for the similar "love theme") but still fun to watch if you are willing to relax and not take it seriously

There are three kinds of very enjoyable action movies - and this is one of them. This is not a spot on blend of hilarity and action like Avengers or Die Hard. This is not a wildly intense action movie like Mission Impossible. I would describe this movie like a made-for-TV version of The Mummy - the effects, etc. are not as big or well done, but it is quality enough and a fun watch.

Nicole Noone: Hey, let's stop for a moment, and consider. I'm way out of your league. Way out. If your league were to explode, I wouldn't hear the sound for another three days. So for everybody's sake, let's just enjoy a companionable silence.

Flynn Carsen: Professor Harris. I should've known he was evil. He gave me an A-minus.

bdls206 thinks this title is suitable for 10 years and over

When a magical artifact is lifted from his library, a meek librarian sets out to ensure its safe return. To do so, however, he enlists the service of a woman with exceptional martial arts skills - who becomes the enforcer in the relationship.