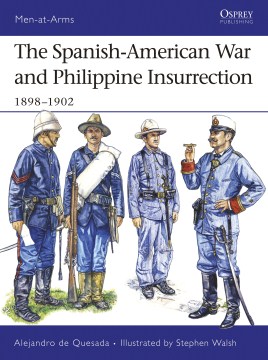 The Spanish-American War and Philippine Insurrection, 1898-1902

In 1898 US public opinion turned against the Spanish for their repression of Cuba. Relations between the two governments soured and ultimately resulted in the mysterious blowing up of the USS Maine in Havana harbor, which triggered a short but demanding war.

A US expeditionary force was sent to Cuba, where the troops encountered both difficult climate and terrain, and a fierce Spanish garrison which, despite being greatly outnumbered, fought hard before surrendering.

The war against the Spanish may have been brief but as Henry Cabot Lodge declared: "Its results were startling, and of world-wide meaning." Victory made the US a nation with global interests.

As an extension of the war, US troops also captured the island of Puerto Rico. The US Navy bombarded Manila in the Philippines, and landed its troops. The Spanish garrison quickly surrendered, but a local anti-Spanish insurgent force under Emilio Aguinaldo resisted US occupation. The conflict continued until 1902, more than 100,000 US troops were eventually committed, and the campaign saw difficult jungle fighting, with indigenous Moro tribesmen fiercely resisting US forces.

Providing a detailed examination of the experiences and equipment of the opposing sides, and featuring rare and previously unpublished photographs, this book highlights this crucial yet oft-forgotten war that changed the future of American foreign policy during "the age of American imperialism."