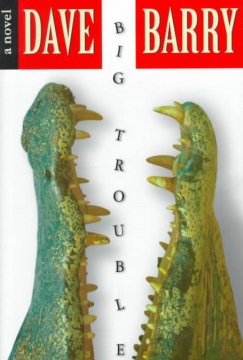 Baker & Taylor
A Pulitzer Prize-winning humorist offers a fiction debut that describes the lives of the troubled denizens of Coconut Grove, including a career-threatened adman, an alcoholic embezzler dodging a couple of hit men, and their dysfunctional families. A first novel. 125,000 first printing.

Blackwell North Amer
In the city of Coconut Grove, Florida, these things happen: A struggling ad man named Eliot Arnold drives home from a meeting with the Client From Hell. Eliot's teenage son, Matt, fills a Squirtmaster 9000 for his turn at a high school game called Killer. Matt's intended victim, Jenny Herk, sits down with her mom in front of the TV for what she hopes will be a peaceful evening for once. Jenny's alcoholic and secretly embezzling stepfather, Arthur, emerges from the maid's room, angry for being rebuffed. Henry and Leonard, two hit men from New Jersey, pull up to the Herks' house for a real game of Killer, Arthur's embezzling apparently not having been quite so secret to his employers after all. And a homeless man named Puggy settles down for the night in a treehouse just inside the Herks' yard.
In a few minutes, a chain of events will begin that will change the lives of each and every one of them, and leave some of them wiser, some of them deader, and some of them definitely looking for a new line of work.

Baker
& Taylor
The humorist offers a fiction debut that describes the lives of the troubled denizens of Coconut Grove, including a career-threatened adman, an alcoholic embezzler dodging a couple of hit men, and their dysfunctional families

Even before the first W Bush election, Dave Barry was making fun of voting irregularities in Florida. This funny novel starts off with a job lead. Contact the right people on election day and you can make money voting early and often for the right people. Business gets trickier as arms deals go comically awry. What's a peacenik reading about terrorism?, Wellll, its comic terrorism...

Just a couple of routine hits gone awry. Henry and Leonard, two professional hitmen from New Jersey, have arrived in Miami to kill drunken, abusive jerk Arthur Hark. Meanwhile, high school student Matt Arnold and his buddy Andrew are involved in a silly squirt gun ambush game called "Killer," and have been assigned to "kill" Jenny Hark. All hell breaks loose when the pro's and the kids arrive at the Hark home to perform their tasks at the same time.

This case of bad timing sets into motion a bizarre, chaotic series of events involving a nuclear bomb, two former Russian soldiers that fell into the black market arms trade after the collapse of the Soviet Union, Hark's wife Anna, Matt's newspaper reporter-turned unsuccessful advertising executive father, Eliot, a competent Miami patrol cop and her muscular, horny, incompetent partner, their superior, a couple of by-any-means-necessary FBI agents, the Hark's pretty illegal immigrant maid, a homeless drifter who lives undetected in the Hark's backyard tree, a couple of losers that survive by scamming tourists out of spare change, a toad that secretes a hallucinogenic substance, and a food-obsessed mutt named Roger.

In other words, just another day in South Florida.

Florida Crime Novels are violent, wild, and wacky in general, led by Carl Hiaasen and Tim Dorsey, and Pulitzer Prize-winning humor columnist Dave Barry easily slides into the genre with Big Trouble. This is one fun, action-packed, hilarious read!