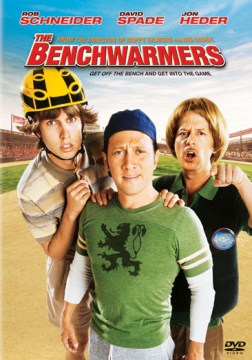 Three guys spent their youth bearing the wrath of schoolyard bullies. They weren't tall, cool, and athletic, so they often got picked on by those who were. But when Gus convinces his two friends Richie and Clark to take some batting practice on a nearby Little League baseball field for old times sake, the three end up challenging a team of eleven-year-olds for the right to play on the field. Gus, often picked on because he was short, is nonetheless a stellar ballplayer, and he single-handedly defeats the other team. When word gets out, neighborhood billionaire Mel decides to bankroll a cross-state tour for "The Benchwarmers" where they'll challenge the meanest little league teams around, with the eventual winner taking possession of a brand-new, state-of-the-art Little League field. Mel, once a benchwarmer himself, hopes The Benchwarmers can give his own son and nerds everywhere hope for redemption as the victories pile up and the fame of the players spreads through chatrooms and podcasts everywhere.
Publisher: Culver City, Calif. : Sony Pictures Home Entertainment, 2006.
ISBN: 9781424803323
1424803322

It had it's funny moments but it's not something I would watch over and over.

This was tons of fun, I found myself laughing throughout most of the movie. I would recommend this to Rob Schneider fans, as it is mostly his childish humor that makes this movie so much fun. This is not well acted, well scripted, or well directed but it is funny none the less.

What a great film. Loads of juvenille humour which really works! I mean look at the picture on the case, you know you're not getting Blackadder-type writing/dialogue. And with Rob Schneider playing the sensible male lead, what does that tell you? Jon Lovitz is brilliant with scads of great lines. David Spade is full of his typical acid-like humour. Unfortunately for him, but fortunately for us, Jon Heder is still playing Napoleon Dynamite (a BRILLIANT film) but perhaps more nerdy. There was nothing not to like about this film (well, maybe a couple of things now that I think about it). Great Star Wars references and former pro athletes only add to make this film even better.

Skip It - The Benchwarmers (2006) 80 min. Juvenile, lewd and completely unfunny.

i luv this movie

Gus: [looking at baseball cards] We've got statistics! I got 30 homeruns!

Gus: Clark, could you not pick your nose in front of me?
Clark: I'm not picking, I'm scratching.
Gus: Scratching what? Your brain?
Clark: Yeah, 'cause it's huge.

Howie: I used to think the sun was evil but now I know it's not.
Wayne: How's the moon treating you.
Howie: Not a fan.

Richie: He just did that steroid free!
Clark: What's steroids?
Richie: Something that makes your 'pee-pee' smaller.
Clark: Ooh... there must be steroids in macaroni!

bdls206 thinks this title is suitable for 13 years and over

A trio of guys try and make up for missed opportunities in childhood by forming a three-player baseball team to compete against standard little league squads.