Saved Searches Advanced Search
​Out of an abundance of caution due to Covid-19, Library branches may close without notice for cleaning. See our up-to-date status of branches​.
Quotation
j
jimg2000 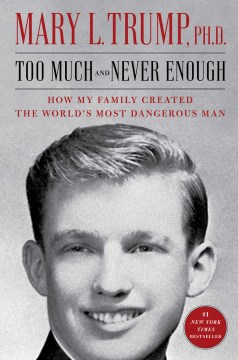 Too Much and Never Enough How My Family Created the World's Most Dangerous Man By Trump, Mary L. Book - 2020
20 - View All Quotes

Aware of the Wharton School’s reputation, Donald set his sights on the University of Pennsylvania. Unfortunately, even though Maryanne had been doing his homework for him, she couldn’t take his tests, and Donald worried that his grade point average, which put him far from the top of his class, would scuttle his efforts to get accepted. To hedge his bets he enlisted Joe Shapiro, a smart kid with a reputation for being a good test taker, to take his SATs for him. That was much easier to pull off in the days before photo IDs and computerized records. Donald, who never lacked for funds, paid his buddy well. Not leaving anything to chance, he also asked Freddy to speak with James Nolan, a friend from St. Paul’s, who happened to work in Penn’s admissions office. Maybe Nolan would be willing to put in a good word for Freddy’s little brother.