Saved Searches Advanced Search
Out of an abundance of caution due to Covid-19, Library branches may close without notice for cleaning. See our up-to-date status of branches including NEW open hours & closures​.
All locations will be closed on Thursday, November 26 for Thanksgiving Day. All locations will resume regular hours on Friday, November 27.
Comment
c
chernandez2132 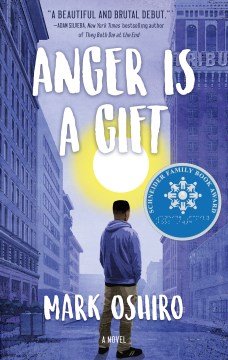 Anger Is A Gift tries to hold a mirror up the world to show you its ugliness. Racism, classism, hatefulness and good intentions gone awry are the cornerstones supporting the message that police brutality is real and awful. But the mirror is distorted and the message diluted in frequently sloppy writing, an unlikeable protagonist and the characters who exist solely to prop him up or draw his fire. The diversity of its cast is squandered, and while it might try to make you angry at an unjust world, one of the most infuriating things is how evident the potential was for this to be an all-around good book.

It's gotten a lot of praise for its diverse cast of characters, and it is indeed refreshing to see so much representation across gender, sexuality and racial lines. But they mostly feel like they’re checking boxes. They’re window dressing for Moss, there to add color and hold his hand and reassure him that he’s good and pure and righteous. The problem is that Moss is horrible. He’s a horrible son, a horrible friend, and he embodies the Angry Black Man trope that you would think a book praised for its diversity would either avoid or subvert.

There’s a misogyny that permeates the pages as well. It’s always the women in Moss’s life who have to “learn their lesson” and “just listen and believe” whatever Moss has to say instead of “making everything about themselves.” And it’s all treated as normal and right.

I would be 100 percent down for this book if while fighting for the people he’s lost Moss realizes how awful he is to the people he still has, but Moss gets no character growth. The closest thing that counts is the realization that some things are worth fighting for, but even that is only after loss touches him again.

There are very few positive things to say about this book. Sometimes the writing isn’t bad, and it tries to tell an important message about police brutality and racism and marginalized communities that have no hope, but it gets lost in mostly clunky prose, paper villains and allies who become antagonists to the point where the only clear message is “Police and white people bad, everyone else good.”

And, look, I didn’t come into this book expecting or wanting white saviors. They’re not needed. We NEED books like what Anger Is A Gift could have been. Instead, we got this. It certainly makes me angry, but if it’s a gift, it’s one I’m more than ready to return.